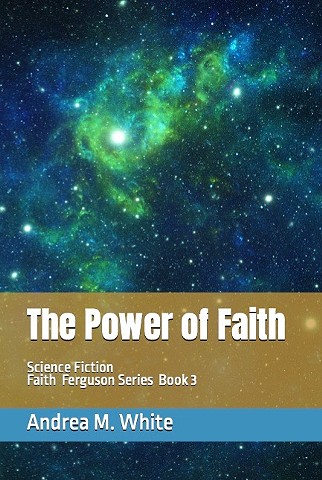 The Power of Faith
Book
< previous

As its doors opened into the entryway, the small private elevator that serviced Faith Ferguson’s Bay State Road condominium was crammed full of her luggage. So much so, that to get out, Faith had to climb over one particularly overstuffed suitcase. She pulled each bag off, then pushed the button to close and lock the door. Kicking off her shoes, Faith walked into the kitchen to make some tea and was pleased to see a box of her favorite pastries sitting on the counter, with a note from her boyfriend, Edward Sinclair, taped on top. It said that he’d been there that morning and that he’d stocked her refrigerator. “Oh,” she said, aloud, “thank God.” Faith pulled out her phone to call him, and before she had a chance to speak Ed said, “Hey, is this Faith the Fáidh?” “Enough of that,” I’m hoping to get back to normal, sooner rather than later.” “Normal it is,” Ed said. “Are you too tired for me to come over tonight?” “No, I’m going to take a nap now, and I should be fine by then. By the way, thanks for the food.” “Beth gave me the elevator code. Hope that’s okay.” “It’s more than okay. I think that I would have actually cried if I’d had to go out and forage for something to eat.” “Shetland to Boston is a long haul, that’s for sure. See you tonight.” “Love you,” Faith said, as she ended the call. Faith’s desire to be normal was, however, not to be fulfilled as she suddenly received the strongest vision, she’d ever experienced. She could barely breathe, as a vision of a dead woman appeared before her. The woman was lying on the floor in a pool of blood. The image was clear, but Faith was so shocked by it, she didn’t make any attempt to see if she could look around and gain any additional information about the scene in front of her. Instead, she immediately placed another call to her boyfriend. Ed was a Boston homicide detective, and Faith wondered if he’d been working on a case, and she’d somehow picked up a telepathic message from him. They were both witches of Scottish heritage, known as Buidseach. While Faith had known of her abilities, to at least some extent, all her life, Ed was a newly minted member of the clan and had only learned about his powers over the summer. “So much for normal,” Faith said, as he answered. “What’s happened?” he asked quietly, not wanting to have to explain anything extraordinary to his, very normal, police partner, Paul Malloy. “I just got a vision of a woman lying dead on a floor. You working on anything like that?” “Jeez, no. Paul and I have spent the morning going over reports and getting ready to testify at a trial. Stepping away from his desk so as not to be heard, Ed said, “I know you’ve had premonitions, but have you ever had visions before?” “Nope, this is all new. Must be related to this Fáidh thing.” Over the summer, Faith had learned that in addition to her rather substantial Buidseach abilities, she was also a Fáidh, or seer, who could communicate directly with the Divine. Although the full ramifications of that discovery had yet to be revealed. “What exactly did you see?” Ed asked. “A woman lying on what looked to be a living room floor in a pool of blood. Nothing to tell me who or where she was.” “We don’t have any unsolved cases like that going on. Are you okay?” “I am. If this is going to be my life, I’ll just have to roll with it. See you tonight.” “Get some rest,” Ed said. There were any number of people that Faith could have called to try and get answers about this latest development, but she was just too tired. So, after making herself a bowl of soup, she went into her living room. Her large bay windows overlooked Boston’s Charles River, and Faith found the familiar scene to be both beautiful and reassuring. She was home, and she would deal with whatever her new, enhanced, life presented her.

Ed Sinclair had been home from Scotland’s Shetland Islands for over two months, and since that time, as Faith had predicted, the fact that he was Buidseach had faded into the background. He was back to his real job of Boston homicide detective, and that was just fine with him. That said, Ed was having some fun doing things like using his power of levitation to retrieve the television remote, and his power over the natural elements to save what had been a rather sad looking ficus tree in his apartment. Other than those mild indulgences and reading some books on the craft that he’d brought back from Scotland, Ed focused on the real world, and his real job. That was about to change, however, as a call came into Boston’s District Four Police Station. “Come on, we’ve got a body,” Paul Malloy said as he put down the phone. A drive across town brought them to the Haverland Theatre, which they found to be surrounded by police cars and emergency vehicles. Walking into the lobby, they saw a group of people corralled in one corner. “Who are they?” Paul asked one of the officers. “Some of the cast, and that guy over there’s the director. He found the victim. She was evidently the star of the show.” “Okay,” Paul said, “get their statements, contact information, and hold on to them.” As they walked toward the stage, the detectives saw a young woman lying motionless on the floor. Ed’s eye’s widened. The woman was lying in the middle of a set that appeared to be a living room. Without comment, he stepped off to the side and called Faith. “Can you describe the scene you saw?” Ed asked. “A blond girl, in a maroon dress, lying on the floor.” “Do you remember anything about the living room?” Ed asked. “It was old fashioned. Like something from the early nineteen hundreds.” “It was a stage set. I’m there,” Ed said. “Why the heck did I get a vision of that?” “You tell me,” Ed said. “I wish I could.”